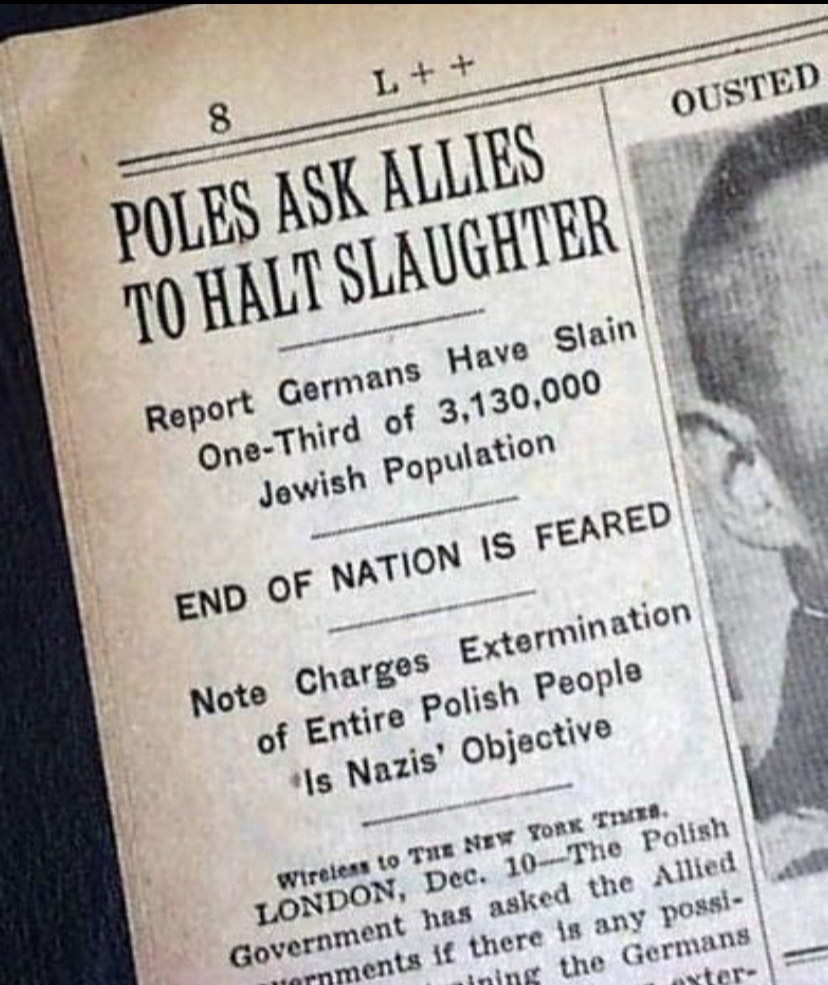 I often see many in Holocaust groups question why more people didn’t do something to try and tell the world about the Jewish genocide.

That somehow the “world” was silent.

That is not true.

Indeed, the Polish repeatedly tried to warn the world about what they witnessed happening to the Jews; from there, the world was silent.

I often see many in Holocaust groups question why more people didn’t do something to try and tell the world about the Jewish genocide.
That somehow the “world” was silent.
That is not true.
Indeed, the Polish repeatedly tried to warn the world about what they witnessed happening to the Jews; from there, the world was silent.
Let’s also put this in a historical context.
The war began in 1939 in occupied Poland. The Poles were the first to be targeted by the Germans, not the Jews. The murder ratio of those being murdered was 9/10 higher ratio for the Polish. Auschwitz was built for Polish prisoners. The Final Solution didn’t begin until 1941, so the Poles were being murdered and imprisoned all along.
Even though the Polish faced this horrific occupation themselves, they still warned the world about their Jewish citizens. The Polish government-in-exile prepared a detailed report, giving it to all allied nations. (http://www.auschwitz.org/.../the-role-of-the-polish...)
Jan Karski even traveled to the US to speak with Roosevelt. Roosevelt wanted to talk about horses. (www.jankarski.net/en/about-jan-karski/jan-karski-life.html)
Supreme Court judge Frankfurter, who was Jewish, refused to believe him.
Witold Pilecki, a Home Army officer, even volunteered for Auschwitz, then escaped and sent out his report to no avail.
http://www.washingtonpost.com/.../pilecki-auschwitz.../
In Poland, if you helped a Jew in any way, you and your whole family would be murdered as well. Despite this, tens of thousands of Poles made the ultimate sacrifice to save Jews. Would you be so brave? One such family was the Ulma family. https://muzeumulmow.pl/en/museum/history-of-the-ulma-family/
Only in Poland did such a group exist like Zegota, a group created specifically to save Jews. http://www.narrativepathsjournal.com/guest-column-zegota.../
Some Poles also did not help, but it is hard to judge them considering what they risked. Few were criminals and turned over Jews, but we must also assess Jewish collaboration if we want to be accurate.
The Poles that did hand over Jews faced the death penalty from the Polish underground; Many Jews that collaborated did not.
When looking at history and trying to comprehend it, we must look at the time and the context, and only then we should be pointing fingers or blaming. I would emphasize this even more when we have self-reflection and perhaps learn that who we glorify may not be perfect.
Many, many more Poles helped Jews, and we will never know their story because they were murdered with those they were trying to save.