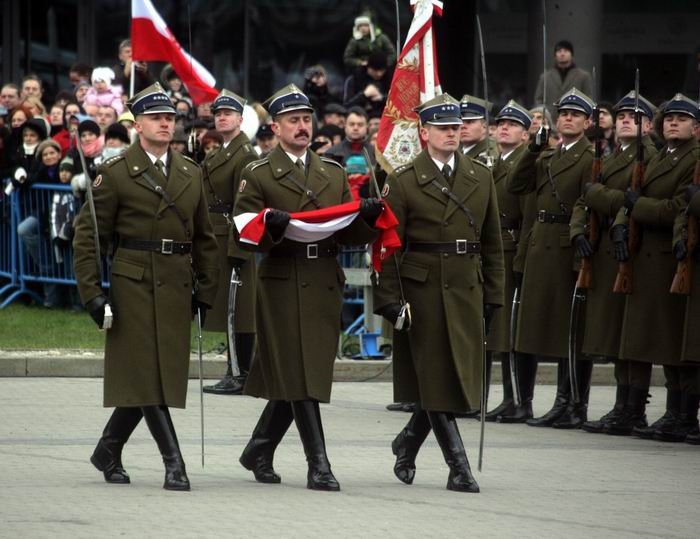 Poland’s Independence Day (Narodowe Święto Niepodległości) is celebrated on the 11th of November.

This day commemorates when Poland regained its sovereignty from the German, Austro-Hungarian, and Russian Empires in 1918.

Poland’s Independence Day (Narodowe Święto Niepodległości) is celebrated on the 11th of November. This day commemorates when Poland regained its sovereignty from the German, Austro-Hungarian, and Russian Empires in 1918.

Poland was not a country for over 123 years. It finally gained independence after much resistance and kept its culture and language intact under strict rule, partitioned by these three countries intent on wiping them out.

Under the command of Józef Piłsudski, appointed Commander-In-Chief on November 11th, 1918, Poland formed a new government. Poland’s Independence Day was established in 1937 and was only able to be celebrated twice before World War II began.

Subsequently, Poland fell under the control of the USSR, forbidding patriotic celebrations. After the fall of communism, Poland’s Independence Day was reinstated and celebrated again, beginning in 1989.

Why is it essential that Poles and others celebrate Polish Independence Day?

Poland is an exceptional country and has proven itself to be so under the most horrific and challenging circumstances.  Few could do what the Poles could do.

During World War II, they were one of the only countries that did not collaborate with the occupying forces of the Germans. Unlike propaganda and revisionists state, they worked unlike anyone else in occupied Europe to save their Jews.  They were at the forefront of saving Jews, and the underground saved more Jews than any other allied country or organization.

Poles then never conceded to the communist rule and even fought on bravely resisting until 1963 with armed combat. While England celebrated the Beatles, the Poles were still in armed combat against the communists. Can you imagine? Tens of thousands of Poles were tortured and murdered after World War II and then forgotten by the world because the West betrayed them. Let’s not forget that, and now they are being betrayed by the West again for being “proud” of how they acted in the face of such evil.

Today many lies are being spread about Poland, yet due to the lack of our society’s critical thinking and lack of fact-checking many are believed. Poles are compared to Nazis, antisemites, and worse.  This is not to be believed.

It fits a current narrative propagated for dubious agendas; Poles could not write their history being stuck behind communism.

Today the marches on independence day are lied about worldwide, calling Poles fascists and Nazis.  It is incredulous that they have the gall to make up such vile accusations against families and even diverse marchers.  This shows the absolute lack of morals we have in the press today.

And how is it that we in the U.S. and other countries pride ourselves in our past and openly celebrate our nation’s past while the Poles are held to a different standard?  This is unfair and unjust. We all have a right to be proud of our country’s history, as do the Polish.

For more reasons why Poles should be proud, consider the following list:

1. Only Poland did they never capitulate; never surrendered to the invaders, and fought from the first to the last day of the war.

2. Only Poland never formed a collaborative government, as in other German-occupied countries.

3. Only in Poland were there never armed troops collaborating with Germany. These were created in almost all other European countries - also those not occupied by Germany and were even fighting against Germany.

4. Only in Poland an underground state was created - a phenomenon on a worldwide and historical scale.

5. The Poles alone, despite the occupation of their territory, set up an entirely voluntary 650,000-man army - 400,000 AK soldiers and 250,000 volunteers fighting alongside the Allies in the West – the 4th largest army; Armies in other countries were recruited mainly from compulsory conscription.

6. Only in Poland did the Germans carry out the plan to completely murder the Polish intelligentsia, the educators, doctors, and lawyers, but this was just the beginning – the ultimate goal was complete extermination.

7. Only in Poland did street round-ups take place - hunting people on the street – and Poles, the first victims, would sometimes hide in the ghettos or wear stars of David to avoid round-ups. - those captured were sent to slave labor or death camps. Poles comprised the most prominent slave laborers.

8. Only in Poland were street executions carried out to terrorize the population.

9. Only in Poland the Germans murdered more Poles (3 million) than Jews living in Poland (2.7 million).

10. Only in Poland, as a result of the German occupation, 22.2% of Poles lose their lives, and thus Poland suffered the most significant population losses of all the countries of the world; for comparison, 0.8% of Belgians, 1.5% of French, 0.8% of Englishmen died.

11. Only in Poland did the Germans plan and, to a large extent, implemented the idea to wipe the capital, Warsaw, of the country off the face of the earth.

12.  In General Plan OST, the intention over some time was to eliminate Poles from the world.  So, it was a planned genocide that just never happened.

12. Only in Poland did no state institution participate in the extermination of the Jews.

13. Only in Poland, an institution of the underground state-provided help to Jews -this was – Żegota – Under brutal interrogation, not one Pole ever elicited information.

14. Only in Poland did the underground state prepare a report documenting the German persecution of Jews.

15. Only the government of the Republic of Poland appealed to the Allies for help for the Jews to protect them from extermination, which in itself could not prevent.

16. Only in occupied Poland did the Germans introduce the death penalty for the helper and their family for even giving a Jew some water.

17. Only in Poland did the underground state impose the death penalty for a denunciation of the hiding Jews.

18.  An estimate is over 50 thousand Poles died helping Jews even though many Jews felt animosity towards Poles and sometimes the Poles didn’t know the Jews they were helping. 3 million helped them in some form even knowing their lives were at risk.

The fact is, thousands of Poles that saved Jews were murdered with the Jews they saved and their names will never be known to the world.