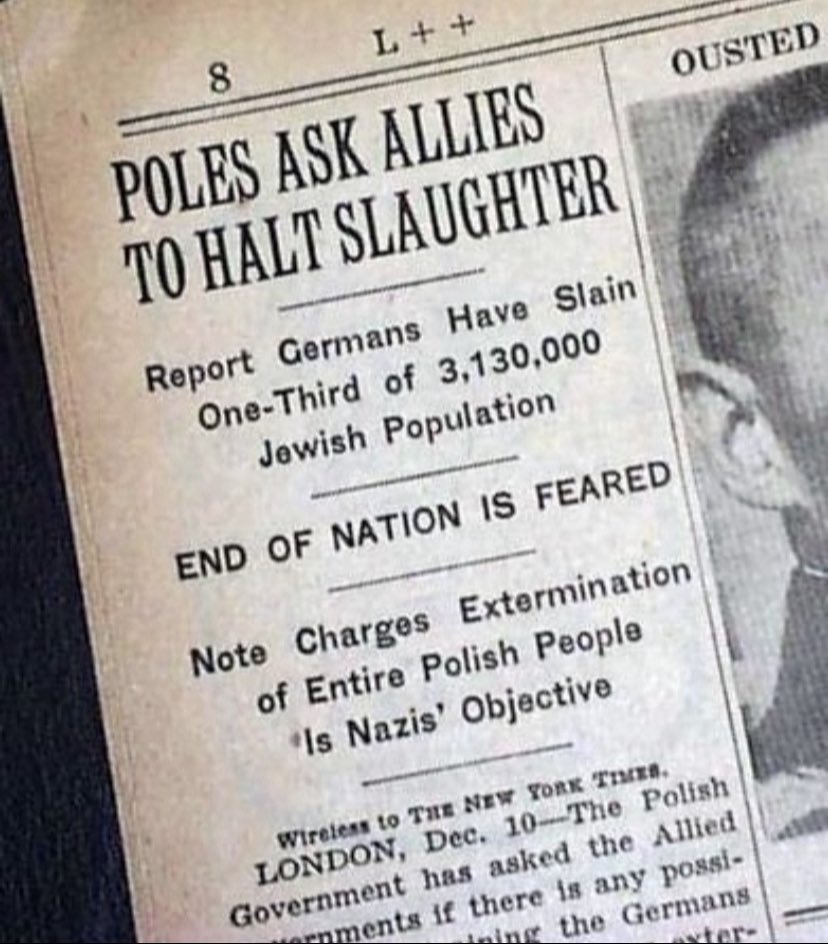 Why didn't the world do anything to save Jews? The Poles did - an assessment on Polish Jewish relations during the war

You may often hear that the world was silent during the Holocaust or that Poland didn’t do enough to save Jews, but is that really true?

Maybe this is something that people say because they’re embarrassed. After all, they didn’t help; think about it? Well, whatever the case, there is simply a lack of recognition for a country that did so much for the Jews.

So let’s talk more about Poles and Jews, and also how Poles did help and save Jews. All of this is documented in Jewish and Polish firsthand accounts.

I will add that this speech will address assumptions, morals, accountability, self-reflection, and justice for all.

You may often hear that the world was silent during the Holocaust or that Poland didn’t do enough to save Jews, but is that really true?

Maybe this is something that people say because they’re embarrassed because they didn’t help; think about it. Well, whatever the case, there is simply a lack of recognition for a country that did so much for the Jews.

So let’s talk more about Poles and Jews, and also how Poles did help and save Jews. All of this is documented in Jewish and Polish firsthand accounts.

I will add that this speech will address assumptions, morals, accountability, self-reflection, and justice for all.

The Polish resistance saved more Jewish lives in the Holocaust than any other Western Allied organization or government.

Poland was the first to repeatedly warn the world about the German genocide, yet no one listened. Jan Karski, part of the Polish underground, even snuck into the ghetto and risked his life to leave occupied Poland, met with Roosevelt, who only wanted to talk about horses. Supreme court justice Frankfurter who happen to be Jewish called him a liar; he said Mr. Karski, a man like me talking to a man like you has to be completely honest. So I have to say: I can’t believe you.

The Polish government in exile also warned all governments and the media in the West, but the West was silent. No one wanted to listen to Poland, and Poland went above and beyond warning the world over and over - they were begging. In the Terrible Secret, Walter Lacquer writes, “The long report submitted by Edward Raczynski, the Polish representative of the Allied governments, of 9 December 1942 contained the fullest survey of the ‘final solution. No other Allied government was remotely as outspoken at the time and for a long time after.”

Then from 1942 Polish government regularly sent messages to the west: “The numbers of Jews murdered by Germans exceeds one million we do not understand your silence, we can still save thousands of Jews, women, and children.

He then states, “What about the Jewish leaders who continued to doubt the authenticity of the news well after it should have been obvious that there was no more room for doubt?”

The government in exile was even providing funding to the Jews while Jewish organizations were not.

The first organization in the United States to help Jewish orphans in Europe was formed after the war in 1946.

Another man who warned about the German genocide was a Polish captain Witold Pilecki. This man volunteered for Auschwitz to find out information about what was going on, set up resistance within Auschwitz, and then escaped Auschwitz, wrote a report, and sent this out demanding help to no avail. West didn’t want to listen; his sacrifice was just another failed attempt by a Pole to help the Jews in Poland. He was tortured, tried, and executed in postwar by the Stalinists in Poland, and still, most people don’t even know his incredible story.

Another part of the underground, that helped Jews was a group called Zegota that went about helping Jews by giving them fake identities at the cost of their own lives. There was no such organization in occupied Europe

Members of Zegota saved between 40 – 50 thousand Jewish lives all at the risk to their lives, under torture no one ever broke on the organization.

When ghetto uprising took place, the Poles were extensively involved in supporting it and providing arms and supplies, several Poles were even killed helping. Without help from Polish underground the event would not have been possible.

It was only in occupied Poland that a Pole caught giving a Jew water was liable to have their entire family executed, and even the whole village could pay the ultimate sacrifice. There must be a reason. If Poles were so bad to Jews, then why would the Germans implement such punishments? Logically, they wouldn’t.

There was no death penalty for helping Jews in the rest of Europe.

Have you ever wondered why?

If what you hear from some people that Poles were active in turning Jews over to Germans or killing Jews, why would they issue this order? They wouldn’t? It just doesn’t make any sense.

Yad Vashem has the number of Poles saving Jews at 7,000. I disagree with this number, and I have to say I feel there are reasons why Yad Vashem has such low numbers, but I won’t get into this, but that number is deficient considering the accurate numbers of Poles that saved Jews.

The actual estimate of Poles aiding Jews is up to 3 million, and those killed for saving Jews over 50 thousand but so many Poles died with the Jews they saved, and their names will never be known. Also some  Jews left Poland and never back and have never looked back.

Amongst the tens of thousands that died was the Ulma family. This family was recognized. Despite poverty and risk, the Ulmas gave shelter to eight Jews. The whole family, in total nine members,  with the Jews were murdered and Wiktoria the mother was in the seventh month of her pregnancy. About twenty other Jews were sheltered by Poles in Markowa and survived.

In reality, did Poles even have to save Jews considering that this would cause their death and the death of their family? Think about that.

Would you be so brave?

If the situation was switched, what would happen? We all must think about this before making assumptions or condemning people.

Author Gunnar Paulsson states 28,000 Jews escaped the Warsaw Ghetto and found refuge on the outside. He estimates that out of the city's population of about one million, about 70,000 to 90,000 gentile Poles were involved in helping those Jewish escapees.

Also without Polish aid, the Warsaw ghetto would have starved to death and yes this was with assistance even under threat of death.

He also says that the Jewish fear of Poles may have cost Jews their lives. This goes back to stereotyping, the same we see today, but it turned out much more deadly. The problem was many in the Jewish community were so detached from Poland that they knew nothing about customs and a large percent didn’t even know the Polish language. This in fact was another barrier for Poles helping Jews not knowing the language.

In reality, it was the not Poles other Jews needed to fear. Within the ghetto, Jews had a cooperating government, the Judenrat. Judenrat was created in September 1939, the very same month when Germans brutally attacked Poland.

The Judenrat was cooperating with Germans long before “Final Solution” was planned or implemented. The Judenrat provided quotas for the Germans to send other Jews to concentration camps; those that put the Jews on the trains were the notorious Jewish police.  There were nthousands of members in their ranks.

Many say this was a choiceless choice, but unfortunately, according to diaries and accounts, the ghetto was full of self-seekers, criminals, psychopaths, perverts, and the worst among humanity. Obviously, a situation like this puts people in a precarious situation, but it should not absolve them from crimes. People are people; no one is above the law.

It's fine and even promoted to shame and bully the Poles, but we are not allowed to hold other ethnicities accountable. This is a moral double standard, and ethically it is wrong.

Recently a rabbi, a man who is supposed to be respected and honorable, a man who teaches his community said the Poles were massacring Jews with glee. As usual, when I try and have a reasonable dialogue based on facts, I am blocked.

Just imagine all of the Poles that risked their lives to save Jews, and how that makes them and their families feel. Also,  quotes like this are, sadly, a common occurrence.

So as for collaborators, in the book Political and Transitional Justice in Germany, Poland, and the Soviet Union from the 1930s to the 1950s, by Magnus Brechtken, the collaboration for Poles is out of some 28 million total ethnic Poles, it is 28,000, that comes out to 0.1% of the ethnic Polish population. This is a negligible percentage.

So this rabbi and others may want to reaccess history or look at their own instead of pointing the finger at others.

When looking at this history objectively, we must say that Poland overwhelmingly helped and saved Jews. Without them, many Jewish families would not exist today.

Before making such hurtful and hateful accusations, please be careful about what you say because it may be false and painful. I know this personally.

Don’t believe everything you hear. It’s easy to be misled these days. Use your own research and thinking to find out what the truth really is.