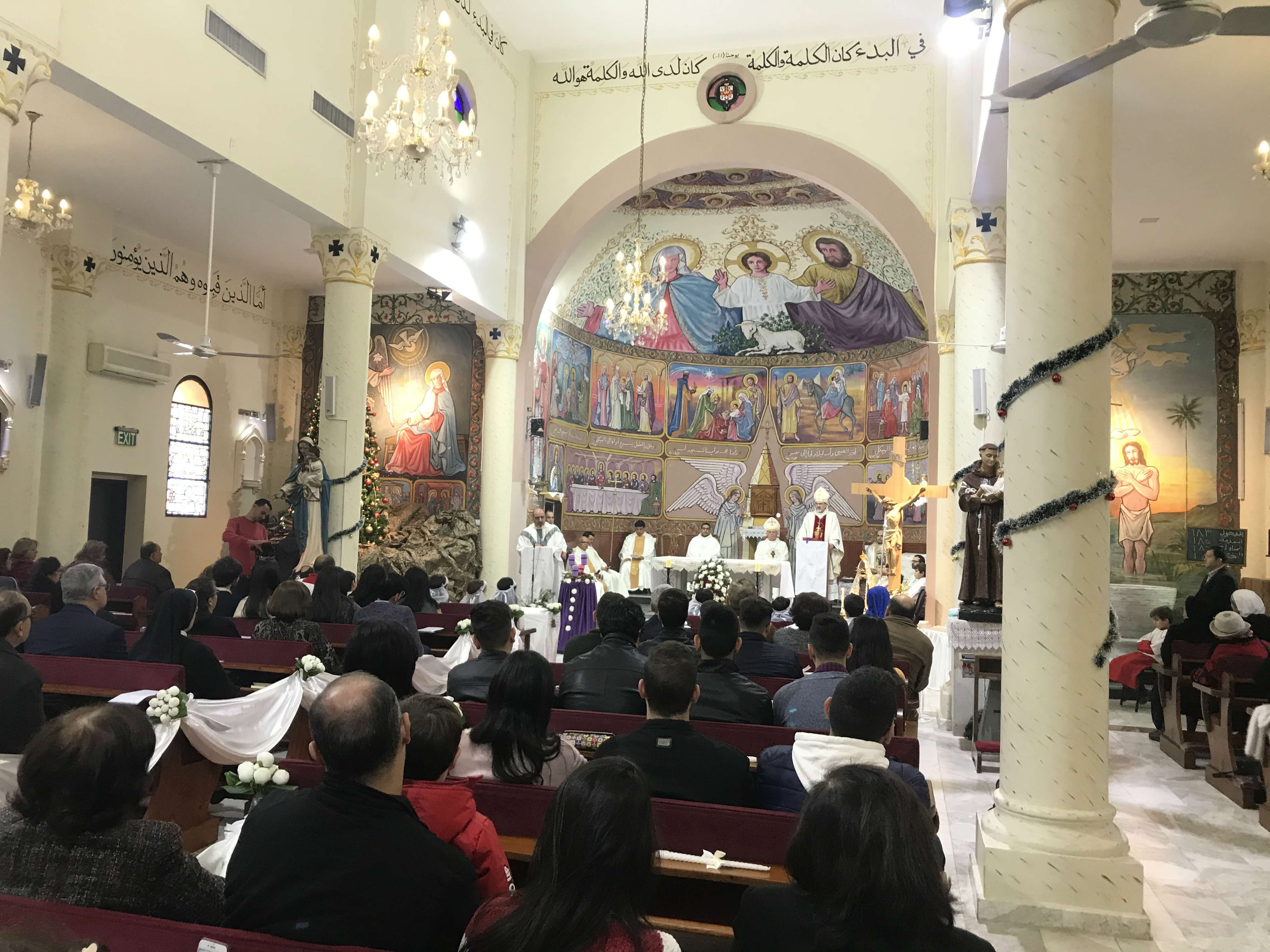 The Fate of Palestinian Christians

One of the most ancient Christian communities has been reduced and is in continues to dwindle even more. There is a simple reason for this and that reason is Israel. In the last 70 years the population of Christians has dropped nearly ten-fold.

One of the most ancient Christian communities has been reduced and is in continues to dwindle even more.  There is a simple reason for this and that reason is Israel.  In the last 70 years, the population of Christians has dropped nearly ten-fold.

Christianity here survived the persecution of its earliest converts under Roman rule. It flourished under the Byzantine Empire, endured the early Islamic caliphates, and enjoyed a revival under the Ottoman Empire before the territory of modern-day Palestine passed into British control in 1917.

70 years ago, Bethlehem, the birthplace of Jesus Christ, was 86 percent Christian. The demographics of the city, however, have fundamentally shifted, especially after the Israeli occupation of the West Bank in June 1967, and the construction of the Israeli wall, starting in 2002. Parts of the wall were meant to cut off Bethlehem from Jerusalem and isolate the former from the rest of the West Bank.

“The Wall encircles Bethlehem by continuing south of East Jerusalem in both the east and west,” the ‘Open Bethlehem’ organization said, describing the devastating impact of the wall on the Palestinian city. “With the land isolated by the Wall, annexed for settlements, and closed under various pretexts, only 13% of the Bethlehem district is available for Palestinian use.”

Increasingly persecuted Palestinian Christians in Bethlehem have been driven out of their historic city in large numbers. According to the city’s mayor, Vera Baboun, as of 2016, the Christian population of Bethlehem has dropped to 12 percent, merely 11,000 people.

A study was conducted by Dar al-Kalima University in the West Bank town of Beit Jala and published in December 2017.  They interviewed nearly 1,000 Palestinians, half of them Christian and the other half Muslim. One of the main goals of the research was to understand the reason behind the depleting Christian population in Palestine.

In the study it concluded that “the pressure of Israeli occupation, ongoing constraints, discriminatory policies, arbitrary arrests, confiscation of lands added to the general sense of hopelessness among Palestinian Christians,” who are finding themselves in “a despairing situation where they can no longer perceive a future for their offspring or for themselves”.

Muslims.  That information is false and used to support Israeli propaganda.

A Christian shopkeeper, stated that 2,500 or so villagers who live in Aboud are split roughly half and a half between Muslims and Christians, adding that they all “live like brothers”.

As for Christians and Muslims, even during the 2014 Israeli assault on Gaza, Operation Protective Edge, the churches and the YMCA threw open their doors to house displaced people and serve emergency rations and aid. After the end of the fighting, the Christian schools reopened their doors within three weeks, where Muslims attend.

As it is, most leave to escape the discrimination at the hands of Israel which is the common fate of all Palestinians, Christian and Muslim alike.

Christians state, “This continued harassment withers away the spirit,”, and “The stress is emotional and physical. Those of us that have the option often choose to leave."

A preacher said: ‘In my opinion, if all the Christians emigrate from the land of the Holy One, it would be easy for Israel to get rid of the rest of us. They will make the struggle a religious war between Islam and Judaism. They will bring the Christian countries to their side.”

Many Palestinian Christians told me they feel threatened by the Christian Zionist church movements, which are welcomed by the Israeli government.

"In this vein, Christian Zionists consider Israel’s expansion into the West Bank via illegal settlements a positive development and even support Israeli expansion into Jordan’s East Bank.”

Two percent of Palestine’s Christians live in the impoverished and besieged Gaza Strip. When Israel occupied Gaza along with the rest of historic Palestine in 1967, an estimated 2,300 Christians lived in the Strip. However, merely 1,100 Christians still live in Gaza today. Years of occupation, horrific wars, and an unforgiving siege can do that to a community, whose historic roots date back two millennia.

Like Gaza’s Muslims, these Christians are cut off from the rest of the world, including the holy sites in the West Bank. Every year, Gaza’s Christians have to apply for permits from the Israeli military to join Easter services in Jerusalem and Bethlehem.

Last April, only 200 Christians were granted permits, but on the condition that they must be 55 years of age or older and that they are not allowed to visit Jerusalem.

Can you imagine that?  The Christians that once resided and could visit their holy places anytime are now limited and need passes from the Israeli army?  This is obviously wrong and restrictions like this are similar to apartheid South Africa.

The Israeli rights group, Gisha, described the Israeli army decision as “a further violation of Palestinians’ fundamental rights to freedom of movement, religious freedom and family life”, and, rightly, accused Israel of attempting to “deepen the separation” between Gaza and the West Bank.

In fact, Israel aims at doing more than that. Separating Palestinian Christians from one another, and from their holy sites (as is the case for Muslims, as well), the Israeli government hopes to weaken the socio-cultural and spiritual connections that give Palestinians their collective identity.

Israel’s strategy is predicated on the idea that a combination of factors – immense economic hardships, permanent siege and apartheid, and the severing of communal and spiritual bonds – will eventually drive all Christians out of their Palestinian homeland.

Israel is keen to present the ‘conflict’ in Palestine as a religious one so that it could, in turn, the brand itself as a beleaguered Jewish state in the midst of a massive Muslim population, especially extremists in the Middle East. The continued existence of Palestinian Christians does not factor nicely into this Israeli agenda.  That is why they want and have been driving Christians out of the holy land.

Sadly, however, Israel has succeeded in misrepresenting the struggle in Palestine – from that of political and human rights struggle against settler colonialism – into a religious one. Equally disturbing, Israel’s most ardent supporters in the United States and elsewhere are religious Christians.

This is mindboggling that Christians are supporting non-Christians over Christians.  The false theology of the end-times and God’s chosen people has been problematic, to say the least, but the Jews, are happy about this although surely many must mock this quietly.   The bible has been manipulated to support those that in many ways despise the Christian God over the brethren in need.

It must be understood that Palestinian Christians are neither aliens nor bystanders in Palestine. They have been victimized and have also played a major role in defining the modern Palestinian identity, through their resistance, spirituality, deep connection to the land, artistic contributions, and burgeoning scholarship.

They have long lived in the land and are a part of Palestine.  They have roots and are an ancient community.  Israel has no right to promote the narrative that these Christians are somehow terrorists or a part of Hamas and are a threat.  Many of these individuals were here before the current Jewish population arrived and some were removed during the cleansing in 1948.

As Christians, we should stand in solidarity with other Christians and show support for their rights and for the determination of their rightful homeland.  Why are we supporting and arming people that are intent on the destruction of our fellow Christians?  We need to rethink what we are taught and what we hear in the news.