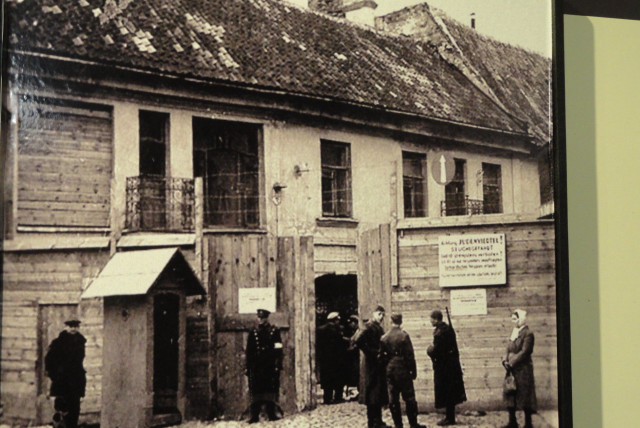 Attitudes and assistance to Jews in Wilno by Poles

Much has been written about Polish participation in the mass killings of Jews in the summer of 1941. Jedwabne, Radzilow, Tykocin and other small towns in the Bialystok region.

According to the thesis of professor Jan T Gross, Polish participation in the killing of Jews was widespread across former Eastern Polish territories.

This has proven quite bogus as for the number claims and it does not provide historical context as to what had taken place just prior to this in eastern Poland with the mass murders of Poles by their Jewish neighbors.

Killings may have taken place, but not to the extent that Gross writes, but these killings also came because of a need for revenge.

A human desire to avenge the atrocities committed against your families.

This context has to be provided to comprehend this in its entirety.

This has proven quite bogus as for the number claims and it does not provide historical context as to what had taken place just prior to this in eastern Poland with the mass murders of Poles by their Jewish neighbors.

Killings may have taken place, but not to the extent that Gross writes, but these killings also came because of a need for revenge.

A human desire to avenge the atrocities committed against your families.

This context has to be provided to comprehend this in its entirety.

If that is the case, then what about the Wilno province. German, Polish, and Jewish sources confirm that Polish people of the Wilno region or province gave much-extended help to the Jews.

In one document which reports Sipo and SD activities between 15 and 30 of september 1941 it is stated that: "..Poles have organized so called Help to Jews, which states that every Pole is obliged to hide one Jew. Generally, close cooperation between Poles and Jews is evident". (Tootigkeits – und Lagebericht Nr. 5 der Einsatzgruppen der Sicherheitspolizei und des SD in der UdSSR (Berichtszeit vom 15.-30.9.1941), Fond 500, opis 1, folder 25, USHMMA RG 11.001M Reel 183., cited in Glaukopis, 1/2003, page 248).

In another German document, one can read that Lithuanians did not like the Poles because they had close cooperation with Jews.

In a letter smuggled to the Polish underground authorities, the author states that Lithuanians murdered Jews without mercy and that the Polish population showed much empathy with the Jews and helped them. (Archiwum Akt Nowych, Microfilm 2285/1, frame 26.)

In another document ( a report) which I found in AAN, Microfilm 2225/6, frame 59, the same description is repeated. Lithuanians killing Jews but Poles are not participating, on the contrary, they were trying to help the Jews.

Herman Kruk's diary, The Last Days of the Jerusalem of Lithuania: Chronicles from the Vilna Ghetto and the Camps, 1939-1944.

According to Kruk Poles were praying for the Jews in the city of Wilno in September 1941. When the ghetto was established, Poles smuggled food into the ghetto in large quantities. Poles also gave food to Jewish forced laborers. In May 1942, when a column of Polish prisoners guarded by Lithuanians walked by the ghetto, they yelled: Long Live the Jews! According to Kruk, the behavior of the Polish population towards Jews was entirely astonishing.

Now, it is evident that Poles in and around Wilno gave extensive help to Jews. According to Gross, the majority of the Poles looked at Jews as the agents of Bolshevism. Poles were also deeply antisemitic. But the behavior of Poles in and around Wilno shows something different. The Polish IPN has concluded that some Poles did indeed participate in the killings of Jews (but this still may be wrong and some may to Poles be revenge-driven) in the summer of 1941 but evidently not in the Wilno region. So, is the description of Polish behavior in Gross books one-sided and based on a narrow base of sources? Is it a myth that Poles looked at Jews as promotors of Communism? Or had the contacts between Poles and Jews been better in Wilno before the war, and that this can explain Polish behavior? Or, did the Polish church in the region have anything to do with the operation of helping Jews?

Common enemy and the role of the Church:

Polish historian, Marek Wierzbicki (professor at the Catholic University in Lublin) has written many books and articles about the northern parts of Poland's former Eastern lands. In one of his books, Polacy i Zydzi w zaborze Sowieckim – Stosunki Polsko-Zydowskie na ziemiach polnocno-wschodnich II RP pod okupacja sowiecka (1939-1941). (Poles and Jews in the Soviet partition. Polish-Jewish relations in the north-east lands of Second Republic under Soviet occupation.)

In the last chapter of this book professor, Wierzbicki writes about what happens in the summer of 1941. When describing events in Wilno and the Wilno province Wierzbicki writes that even though relations between Poles and Jews had not been the best during the Soviet occupation both groups found common enemies in the summer of 1941, the Germans and the Lithuanians. No eruption of antijewish sentiment among Poles emerged in the Wilno province.

Wierzbicki researched Jewish eyewitness accounts in the archives of the Jewish Historical Institute in Warsaw and found several accounts which confirm that Poles were helpful towards Jews. According to these accounts Poles openly protested against the abuse of Jews by Lithuanian police, Poles smuggled food into the ghetto, Polish professors at Wilno University collected money to help the ghetto and Polish peasants reacted very friendly towards Jewish fugitives and gave them food and shelter.

The explanation for this Polish behavior is not only that Poles and Jews had common enemies in Germans and Lithuanians, but also because the Catholic Archbishop for the Wilno province Romuald Jalbrzykowski and many other Polish priests encouraged Poles to help Jews in whatever way possible.

Some examples of Polish helpers

In September 2006 Carmelite father Andrzeja Gdowskiego OCD (1871-1948) was honored post mortem with a Medal by the Wilno Ghetto State Museum for his efforts to save Jews, for example, he provided shelter for Jews in his monastery.

(And this means that the whole monastery must have been involved in this effort).

In January 1942 Gestapo arrested the priest Romuald Swirkowski (1891-1942) because he had helped Jews. He was killed in prison.

Bronislaw Krzyzanowski, a local AK-commander 1942-44 in Wilno, had close contacts with a Jew by the name Eliasz Baran, who was a forced laborer and worked at a German military magazine. Baran became a member of Krzyzanowski's AK-group and he provided the group with military materials which he took from the German magazines.

Baron's work for the AK was very dangerous and because of this, his entire close family was put to safety on a farm run by Polish nuns. But the family was forced to change their place of residence very often and mostly Polish peasants gave them shelter. [Again, we have an account that confirms the positive attitude of Polish peasants in the Wilno region towards Jews.]

Eliasz was shot in 1943 but his wife survived.

Dr. Ludomir Jan Kłoniecki, an epidemiologist, was the director of the so-called Sanitation and Epidemiology station in Wilno/Vilnius during the war. He was appointed by the Germans to prevent diseases to spread from the ghetto. This meant that his staff had daily contact with the ghetto physician and the sanitation station within the ghetto. Dr. Ludomir Jan Kłonieckis staff brought sick Jewish patients to the hospital. Sometimes the staff made it easy for patients to escape.

But mainly his staff smuggled medications, bandages, and food into the ghetto.

Henryk Joffe tells the story of the communist activist Jan Przewalski in Wilno/Vilnius. Jan was one of the founders of the antifascist underground movement in that city. He entered the ghetto many times, wearing a David Star badge on his arm and planned armed resistance with Jewish fighters. They also organized escapes from the ghetto. Jan and his wife Jozefa saved a Jewish child. The child was first hidden at their own apartment but after a short period of time, the child went to Jozefas mother.

Jan and Zofia Bartoszewicz, a Polish Christian couple were hiding in their cellar one of Vilna Jewry´s greatest poets and authors, Avraham Sutzkever. He had reached their door exhausted and starving. Having given the poet sanctuary, Zofia Bartoszewicz went into the city to find Sutzkevers son-in-law, who was in a German labor gang and managed to hand him a loaf of bread. She then walked every day to the ghetto gate, a distance of more than three miles, to arrange for bread, potatoes and even meat to be smuggled into Sutzkever´s wife and mother.

While in hiding, Sutzkever fell ill. Zofia Bartoszewicz and her husband took him from the cellar and, despite the risk of discovery, brought him into their own rooms. Calling a doctor, they said that the poet was their own son. When he recovered, they refused to let him go back into the cellar but insisted he continues to stay with them. All went well until a neighbor caught sight of him. To protect his rescuers from denunciation Sutzkever returned to the ghetto.

(One remark, if the neighbor who saw Sutzkever wanted to denounce Jan and Zofia, it would not have mattered that Avraham returned to the ghetto. The German or Lithuanian Police would still have arrested them for sheltering a Jew. Therefore my conclusion is that Jan and Zofia were never denounced)

Further down on the same page.

Wiktoria Balul, a devout Polish Christian in her sixties, found sanctuary for a Jewish couple, Moshe and Chawiwa Flechtman, in the home of her son Antoni. With the help of her husband Wincenty, Wiktoria provided those in hiding with food from Polish farmers outside the city. Chawiwa Flechtman was pregnant when she was taken to Antoni Balul's home. After the baby was born, the Balul's made sure that it was safely hidden. They also took in a thirteen-year-old Jewish boy, Jakow Jakubowicz, who had escaped from the ghetto. All four of those in hiding with them survived the war.

(Here we also have another reference to Polish farmers outside Wilno/Vilnius. Those who either gave or sold larger amounts of food to Wiktoria must have suspected something. But they never denounced her, obviously).