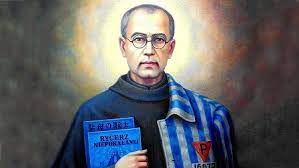 August 14th is a special date, a date to remember, and a date to remind ourselves and others about the ultimate sacrifice that some people take in the name of Christian faith embodied in the Polish spirit.

“Greater love hath no man than this, that a man lay down his life for his friends.”  To Love unto the point of victimhood is how Maximillian Kolbe put it. Very few people could live this kind of life, but one man did.  That man was the Polish martyr and saint Maximillian Kolbe. A truly incredible, intelligent, and courageous individual who did suffer unto the point of victimhood.  Kolbe was beatified as Confessor of the Faith in 1971.

He was canonized by Pope John Paul II (who himself lived through the German occupation of Poland) in 1981 by the tolling of the bells of St. Peter’s Basilica in exultation of the martyr of Auschwitz!   Met by the thunderous applause of thousands in attendance, including some of the surviving prisoners of the Nazi German concentration camp –  whose minds and hearts are forever branded with the memory of his saintly and heroic self-donation – their former cellmate had now been raised to the Altars of the Church!  Once again, Christ reigns!  Once again the enemy has been defeated!

Baptized as Raymund Kolbe, our saint was a normal child and his father was actually ethnic German, which I will address later, yet there is this one stunning exception. One night in Kolbe’s childhood, Our Lady appeared to him in a dream holding a white crown and a red crown. He later related, “She asked if I was willing to accept either of these crowns. The white one meant that I should persevere in purity and the red that I should become a martyr. I said that I would accept them both.” So, yes, St. Maximillian had a normal childhood, but with one tremendous difference that was to define the course of his life. As a student, the young Raymond excelled in what we now call the STEM areas of study (science, technology, engineering, and math).

He also had a passionate interest in all things military. A childhood dream of the priesthood was almost lost for this ardent patriot with a soldier’s heart, as he had hoped for a military career defending his beloved Poland. Complications caused him to abandon these plans and he entered the Franciscan noviate late in 1910 and was ordained in 1918.

By the time he was in his early thirties, Fr. Kolbe founded a religious house near Warsaw,– the City of the Immaculate, from which to expand his evangelization efforts. Starting with a handful of friars, within a decade it grew to house nearly 1,000! That city still exists.

He and a handful of his brothers then travelled to Japan, where they opened another house in Nagasaki. Fr. Kolbe was a man of his times and thoroughly modern in his evangelization. The friars’ made use of the most modern printing technology and distribution strategies for their materials, their arsenal in the Militia’s spiritual war. They even started a radio station and Fr. Kolbe even had plans for a movie studio.

At the start of the Second World War, Kolbe was residing in the friary he set up, the “City of the Immaculata.” By that time, it had expanded from 18 Friars to 650 Friars, making it the largest Catholic house in Europe. When Poland was overrun by the Nazi forces in 1939, he was arrested under general suspicion on September 13th but was released after three months. He could have signed the Deutsche Volksliste, which would have given him rights similar to those of German citizens, in exchange for recognizing his ethnic German ancestry but he refused.

When first arrested he said: “Courage, my sons. Don’t you see that we are leaving on a mission? They pay our fare in the bargain. What a piece of good luck! The thing to do now is to pray well in order to win as many souls as possible. Let us, then, tell the Blessed Virgin that we are content and that she can do with us anything she wishes”

On being released, many Polish refugees and Jews sought sanctuary in Kolbe’s monastery. Kolbe and the community helped to hide, feed and clothe 3,000 Polish refugees, (of which approximately 2,000 were Jews.  On February 17, 1941, he was arrested by the Gestapo for hiding Jewish people.

After a brief internment in a notorious Polish prison the Pawiak, he was sent to Auschwitz concentration camp and branded prisoner #16670. Kolbe was sent to the work camp. This involved carrying blocks of heavy stone for the building of the crematorium wall. The work party was overseen by a vicious ex-criminal ‘Bloody Krott’ who came to single out Kolbe for particularly brutal treatment.

Witnesses say Kolbe accepted his mistreatment and blows with surprising calm. Despite the awful conditions of Auschwitz, people report that Kolbe retained a deep faith, equanimity, and dignity in the face of appalling treatment. On June 15, he was even able to send a letter to his mother. “Dear Mama, At the end of the month of May, I was transferred to the camp of Auschwitz. Everything is well in my regard. Be tranquil about me and about my health, because the good God is everywhere and provides for everything with love. It would be well that you do not write to me until you will have received other news from me, because I do not know how long I will stay here.

Cordial greetings and kisses, affectionately. Raymond.” On one occasion Krott made Kolbe carry the heaviest planks until he collapsed; he then beat Kolbe savagely, leaving him for dead in the mud. But fellow prisoners secretly moved him to the camp prison, where he was able to recover. Prisoners also report that he remained selfless, often sharing his meager rations with others. In July 1941, three prisoners appeared to have escaped from the camp; as a result, the Deputy Commander of Auschwitz ordered 10 men to be chosen to be starved to death in an underground bunker.

When one of the selected men Franciszek Gajowniczek heard he was selected, he cried out “My wife! My children!” At this point, Kolbe volunteered to take his place. The Nazi commander replied, “What does this Polish pig want?” Father Kolbe pointed with his hand to the condemned and repeated: “I am a Catholic priest from Poland; I would like to take his place because he has a wife and children.”

Rather surprised, the commander accepted Kolbe in place of Gajowniczek. He later said: “I could only thank him with my eyes. I was stunned and could hardly grasp what was going on. The immensity of it: I, the condemned, am to live and someone else willingly and voluntarily offers his life for me – a stranger. Is this some dream? I was put back into my place without having had time to say anything to Maximilian Kolbe. I was saved. And I owe to him the fact that I could tell you all this.

The news quickly spread all round the camp. It was the first and the last time that such an incident happened in the whole history of Auschwitz.” Franciszek Gajowniczek would miraculously survive Auschwitz, and would later be present at Kolbe’s canonization in 1971. The men were led away to the underground bunker where they were to be starved to death. It is said that in the bunker, Kolbe would lead the men in prayer and singing hymns to Mary. When the guards checked the cell, Kolbe could be seen praying in the middle.

Bruno Borgowiec, a Polish prisoner who was charged with serving the prisoner later gave a report of what he saw: “The ten condemned to death went through terrible days. From the underground cell in which they were shut up there continually arose the echo of prayers and canticles. The man in charge of emptying the buckets of urine found them always empty. Thirst drove the prisoners to drink the contents.

Since they had grown very weak, prayers were now only whispered. At every inspection, when almost all the others were now lying on the floor, Father Kolbe was seen kneeling or standing in the center as he looked cheerfully in the face of the SS men. Father Kolbe never asked for anything and did not complain, rather he encouraged the others, saying that the fugitive might be found and then they would all be freed. One of the SS guards remarked: this priest is really a great man.

We have never seen anyone like him…” After two weeks, nearly all the prisoners, except Kolbe had died due to dehydration and starvation. Because the guards wanted the cell emptied, the remaining prisoners and Kolbe were executed with a lethal injection on August 14th. Those present say he calmly accepted death, lifting up his arm. His remains were unceremoniously cremated on the 15th of August.

The deeds and courage of Maximillian Kolbe spread around the Auschwitz prisoners, offering a rare glimpse of light and human dignity in the face of extreme cruelty. After the war, his reputation grew and he became symbolic of courageous dignity.  St. Maximilian Kolbe is among twenty modern martyrs from across the globe who have been honored with a statue on the façade of Westminitser Abbey.

This priest who had no greater love than to lay down his life can be seen above the west door of the abbey, along with Dietrich Bonhoeffer, Martin Luther King, Jr., and seventeen others.  Though spared the torture of the starvation bunker, Gajowniczek, the prisoner Kolbe died for had still suffered greatly. He was in Auschwitz for over five years and his sons did not live to see the day of his release.

Kolbe also like many Poles sacrificed their lives for others in the Nazi German reign of terror.  It is estimated that one million Poles assisted Jews and tens of thousands died trying to save Jews, unlike Kolbe, many names will never be known because they died alongside the Jews.

Christian charity and martyrdom is a true act of love for others and Poland as a nation suffered for practicing this doctrine.