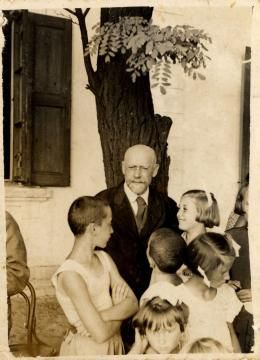 Do you know the story of Janusz Korczak, the man who walked with his orphans to death?

Janusz Korczak was born in the late 1870s into an assimilated Polish Jewish family in Warsaw. He was proud to be Polish and often wore his military uniform.

He had already finished his medical studies and had worked in a military medical support unit in the Far East and as a pediatrician in a Warsaw hospital.

He had also worked as a doctor in orphanages, served in the army, and involved himself in many other activities related to his profession and his passion for writing.

In 1911, he became the head of a new orphanage for Jewish children in Warsaw. He ran the facility (not only this one, but others too) based on his own philosophy for educating young people – each child there had duties and rights, but each of them was also taught to take responsibility for their own behavior.

Korczak was an innovative, passionate, and empathetic educator

1. Don't expect your child to be the way you want them to be. Help him become himself, not you.

2. Don't ask a child to pay for everything you've done for him. You gave him life; how can he repay you? One day he will give a new life, and his child will be the next.

3 . Don't take revenge on your child for your harm so that you won't eat dry bread in old age. The way you make your bed, the way you sleep.

4. Don't look down on his problems. Life gives everyone according to his strength, and you can be sure that for him it is as hard as it is for you, or maybe even harder because there is no experience yet.

6. Don't forget that the most important human meetings are meetings with children. Pay more attention to them— you never know who we'll meet as a child.

7. Don't shut up if you can't do something for your child. Just remember: not enough was done for a child if everything possible was not done.

8. A child is not a tyrant that takes over your entire life. It's not just flesh and blood. This is a precious magic that life has given you to protect and ignite a creative fire in it. This is the inherited love of a mother and a father, in which he will grow not "our", "own" child, but a soul dedicated to preservation.

9. Learn to love someone else's child. Never do to him what you don't want to be done to you.

10. Love your child for who they are - untalented, unsuccessful, grown-up. Be happy to be with him! Moments with a child is a celebration that you still have.

When the German occupiers created the Warsaw ghetto on October 2, 1940, the orphanage run by Janusz Korczak and Stefania Wilczyńska found itself outside the ghetto walls, while the State School of Economics at 33 Chłodna Street was located within the newly created ghetto, so the institutions exchanged buildings.

Mass deportations of the ghetto inhabitants began at the end of July 1942. The deportations to Treblinka camp meant one thing: death. Korczak’s Polish friends offered to help him organize his escape.

But he would not consider leaving the children he cared for. When the German police came into the orphanage one August morning and ordered them to leave the building, the staff took the children outside. A group of 200 children – as witnesses recalled – marched peacefully through the ghetto to the Umschlagplatz.

Later, Janusz Korczak died with 200 children in a gas chamber. He held the hands of the children as they went in. He dedicated his whole life to the children and would never leave them.

Before he went to his death, just before entering the wagons, he was recognized by the Germans, and they offered to let him go on the condition that he would leave the children, and he refused.

The greatness of Janusz Korczak was affected even by the German criminals.

Władysław Szpilman wrote that the children were dressed in the best clothes, joyful, because they were convinced that they were going to the countryside, a boy playing violin led the march, and Korczak carried two youngest in his hands.

The last road of Domu Sierot was also described by the ghetto poet Władysław Szlengel in a poem: "Card from the journal – Action”

How was he going with the kids in the last march,

And the children were cleanly dressed,

With a bare head, with eyes without fear,

He was held by a child behind his pocket,

He held two little ones by himself. "