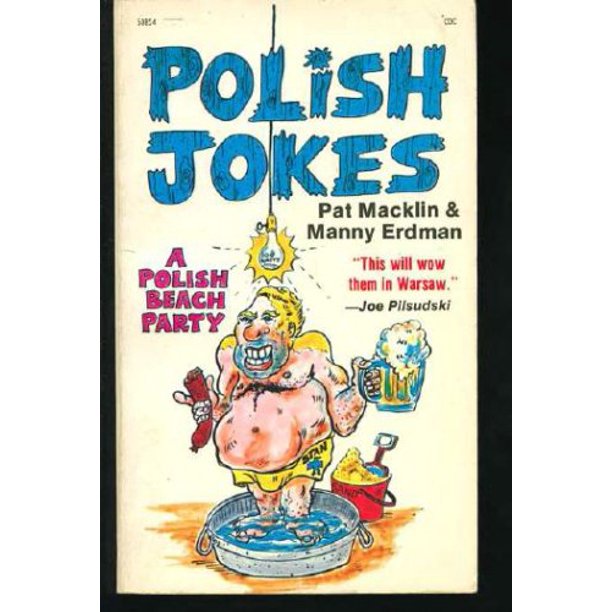 The German and Soviet propaganda history behind Polish jokes

Polish "jokes" came from German propaganda and was then pushed by Soviet communist sympathizers in Hollywood.

Many people will have you believe that Polish jokes result from the Polish themselves. This is because they didn't know the language when they emigrated and refused to assimilate. Those statements are excuses to blame the Poles themselves.

I came across quite a few of those in readings. Blaming victims of hate speech is quite disgusting. Imagine if we did that to any other group. That would not go over, so why is it okay to do that to the Polish?

These were a combination of two despicable ideologies, and those who made these jokes perpetrated the propaganda. If you still tell these jokes or believe the myths, remember where they came from and that you would actually support Hitler's theory.

Ironically, I saw this come from an Israeli newspaper.  The article was about the so-called Polish collaboration, another hypocritical assessment of co-victims, scapegoating Poles.  Don't believe these myths.

The racist stereotype that Poles are intellectually inferior or have subhuman intelligence originated from German and Soviet propaganda.

For example, the myth that a major group of Polish horses was used to attack German tanks in World War II was total German propaganda.   Not once did the Polish Army deploy cavalry against German tanks.  This pure German and Communist propaganda that continues to this day. The Germans repeated this myth until it took a life of its own using the "Big Lie" technique. Germans were masters of propaganda.

The whole quick invasion is a myth. The Germans took a rather heavy toll fighting the Polish.  The Poles put on one hell of a fight against the Germans.  Even today, most people don't know this, nor do they know that the Poles were attacked on two fronts. The Polish could not win against the Germans.  No one could.

The Big Lie is "the intentional distortion of the truth, especially for political or official purposes. Adolph Hitler wrote about this tactic of trying to deceive a country's citizens. ["The great mass of people will more easily fall victim to a big lie than to a small one." Adolf Hitler (1889-1945), Mein Kampf, Vol. 1, Chapter 10, 1925].

The Soviets followed in the path of the Germans.  The cold war era was the perfect time to do this because the Polish could not defend themselves.  Like they could not defend themselves against the lies of their collaboration.  All of this has taken its toll, sadly. This biased and reprehensible propaganda has weaved its way into the western psyche, and few in the west have taken up the fight in Poland's defense.

The Soviet Communists saw the value of this myth and the racist notion that Polish people have subhuman intelligence, so they had their Left-Wing sympathizers in Hollywood push it to the American public using Anti-Polish Television and Movie imagery.

This image of Polish people having subhuman intelligence was of great value to the Soviet Communists.  People would not mind too much if the Soviet Union occupied Poland if Poles were portrayed as having a Slavic culture that is inferior and less human.

Indeed in the West, there were also many communist sympathizers and many in Hollyhood; with that, they could push the skewed narrative of the Poles. "A Street Car Named Desire" is an excellent example of how Poles can be manipulated into subhuman thugs.

The Germans (and even the Soviets) killed Poland's educated class first to make their racist stereotype of "Poland having inferior intelligence" their reality.

Although it did not work, we can see how many Poles of great intelligence have lived.

The Germans also felt "Poles only had the intelligence for Nazi slave labor."

Polish "jokes" were in Hitler's two speeches after he invaded Poland.

Hitler ridiculed Poles in his Sept. 19, 1939 speech in Danzig (today called Gdansk) and in his Berlin speech on Oct. 6, 1939, with these hate-through-humor anti-Polish "jokes" and references.

Michael Preisler, a Polish-Catholic survivor of the German Nazi concentration camp Auschwitz (Auschwitz prisoner #22213), has repeatedly stated how the Germans ridiculed the Polish people as having less than human intelligence. Polish jokes were quite popular among guards in the parts of the German death camps where there were Polish Catholic prisoners being tortured and killed.

Ironically, Left-wing Hollywood and the TV Networks (like NBC-TV) pushed these racist Polish "jokes" even though Hollywood claimed to hate Nazis. Hollywood and NBC-TV hate Nazi propaganda, but not when it applies to Poles.

The recent movie "Katyn" shows the Germans and Soviets killing the educated Polish class in Poland to make Poland "intellectually inferior" and easier to rule. This was during the time Nazi Germany and Soviet Russia were Allies and were collaborating to destroy Poland as per their Molotov-Ribbentrop pact to destroy Poland together.

Although there were degrading jokes about all ethnic groups in the United States due to assimilation problems when they arrived, the jokes that portray Poles as having subhuman intelligence did not predate the 20th Century in America. Racists introduced it in Hollywood and on TV networks like NBC-TV in the late 1960s and 1970s. Imagine making jokes about Jews as they did about Poles.

Many Polish Americans who lived before this time have reported that they never heard these racist subhuman intelligence jokes about Poles until after Left-Wing networks like NBC-TV, in conjunction with Hollywood, introduced them. NBC-TV launched Polish-bashing shows such as "Laugh-In," which ridiculed Polish people constantly. Polish Americans felt the producer of "Laugh-In," George Schlatter, was an Anti-Polish bigot. In addition, late-night bigots were encouraged to bash Poles with "jokes" that portrayed the Polish people as having subhuman intelligence.

Therefore the power of Television and motion pictures was used to demean and dehumanize Polish people with repetitive Big Lie-type propaganda.

So the anti-Polish hate really blew up at this time. Hitler and the Soviets carried on propaganda.

Anti-Polish movies such as "The End" were some of the earliest movies meant to degrade Poles with racist humor. In addition, other anti-Polish shows, such as "All in the Family," were used to degrade the Polish people even though the left-wing producer claimed the ruse that the show was supposed to be "against bigotry."

"All in the family" was filled with racist anti-Polish sound bites such as "Dumb Polak" in an attempt to influence its viewers to have the same anti-Polish prejudice that the Left-wing producer of the show (Norman Lear) had.

So basically, Polish "jokes" were part of a Hollywood/TV media hate campaign against Polish people.

We need to assess this and how Hollywood, an institution that claims to be anti-racist, propagated such vile hatred against the Polish and still does.

We witness the vile hypocrisy of individuals promoting the ideology of Hitler to this day. Although they claim to hate the Nazi ideology, they propagate it daily.