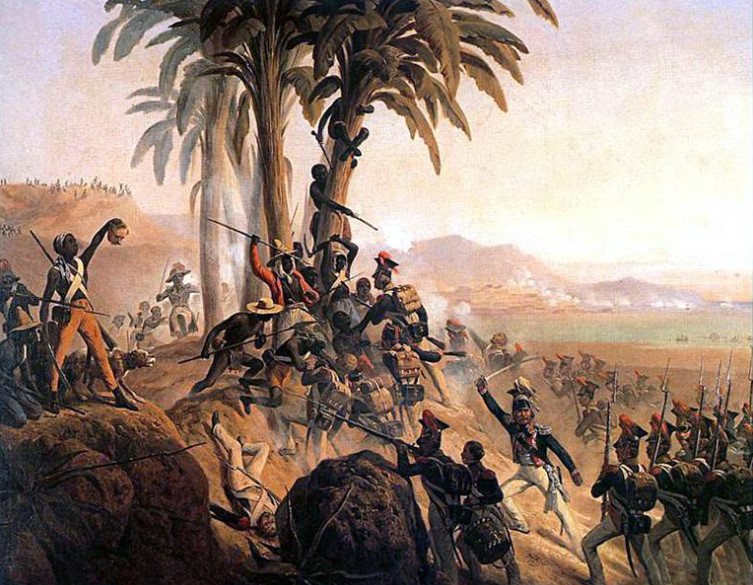 I cover this in the article, how this has been abused and how it has been rewarded in the case of Haitians.

For much of Polish history, those the Poles have tried to help have not returned the favor.  The Haitians have and even to this day revere the Polish.

Regardless of what the crooked media may say, the Poles have always been accepting and generous people. The history of Poland is full of examples, even noticing when World War II broke out, Poland had the largest population of Jews. The Poles allowed them to stay there and practice their religion and culture for centuries. This generosity is in contrast to many other nations that expelled them. There were also other nationalities within Poland as well.

Even though many Jews did not abide by this, creating their own isolated communities with their own culture and language, the Poles still accepted them. They allowed them to remain, showing a great openness and sincere empathy that others would not offer. In the end, in a real sense, it would backfire, but not like the Haitians. They always remembered how the Poles helped them.

The Haitians are the group that still holds the Polish in high regard. They should because of how the Poles aided them. What they did for them was unthinkable at that time in history, as did what the Poles did for the Jews. Yet, the gratitude was on a very different scale.

We should not think in a postmodernist relativist ideological way; I think that is a mistake. As historians, sometimes we have to compare to understand the past and the differences as a basis for comprehension.

I point this out because I am a specialist in Polish Jewish relationships, particularly World War II and postwar history. I find it refreshing that there is still profound respect for the Polish by the Haitians after so much time. I think even an idolization because they knew what the Poles were sacrificing and had a similar religion to the new testament. This deep connection is vital in understanding some behavior, in my opinion, and my longtime dialogue and studies.

Sadly, after how much the Poles risked for the Jews, there is little gratitude and even scorn in many instances. Again, the only way we can understand this is by trying to comprehend them as a people and their situation then and now. Many refuse to address this, but there are apparent differences between Christianity and Judaism, which is a fact no matter how much you want to avoid it.

Religion affects every part of your life and how you behave morally and ethically. Haitians, although enslaved people, were taught the Bible and the words of Christ. Poles and Haitians are followers of Christ and his teachings and had nothing to do with Talmudic thinking. A sharp contrast in ways of life.

The history of this interaction began in 1802 when Napoleon dispatched a Polish legion of around 5,200 men to join the French forces in Saint-Domingue to suppress the Haitian slave rebellion.

Historically Poles may have been hoping to receive French support in restoring Poland's independence from its partitioners and oppressors – Prussia (later Germany), Russia, and Austria – who divided the country in the late 18th century. Some were told that there was a revolt of prisoners in Saint-Domingue. After they arrived and began to be thrown into battle, the Polish platoon learned that the French were trying to suppress an uprising by enslaved Africans fighting for their freedom from white masters.

There was high mortality for the French and Polish soldiers, with more dying because of yellow fever than being killed in warfare. Surviving Polish soldiers admired their opponents and eventually turned on the French Army and joined the rebelling Haitians.

Those Polish soldiers who remained alongside the French intentionally did not follow the orders correctly and refused to murder the captured prisoners. Władysław Franciszek Jabłonowski, half-black, was one of the Polish generals but died soon after reaching Saint-Domingue. Polish soldiers are credited with establishing the world's first free black republic and the first independent Caribbean state.

After Haiti gained independence, Dessalines recognized the Poles and spared them when he ordered the massacre of most French whites and many free people of color (mulattos) on the island. This is important to note because when the time came, and Haitians were free to take revenge on all whites, they specifically let the Poles live. That is indeed an honor, considering how whites treated the blacks.

They granted the Poles classification as Noir (black), who constituted the new ruling class, and the constitution granted them full Haitian citizenship. Cazale became the center of their community. Descendants of Polish-Haitians were peasants like the great majority of most of the residents on the island. Cazale was sometimes called the home of Zalewski, as many locals believed that was the source of the name. Zalewski is a common name, and the Haitian Creole word for home (kay) may also have been part of its history.

Haiti's first head of state Jean-Jacques Dessalines called Polish people "the White Negroes of Europe," which was regarded as a great honor, as it meant brotherhood between Poles and Haitians. About 160 years later, in the mid-20th century, François Duvalier, the president of Haiti known for his black nationalist and Pan-African views, used the same concept of "European white Negroes" while referring to Polish people and glorifying their patriotism. Indeed, although a hater of many whites, the Poles were excluded from this, just as they escaped massacres.

In 1983, Pope John Paul II visited Haiti. He mentioned how the Polish contributed to the slave rebellion leading to Haiti's independence. Jean-Claude Duvalier, the son of Papa Doc and his successor, ordered Polish Haitians to be selected to attend the various ceremonies planned for the Pope's visit and to wear "traditional clothes." Most wore their Sunday best.

One of the most revered Polish religious symbols is the icon named the Black Madonna of Częstochowa. It is thought to have been absorbed by Haitian Voodoo as Erzulie or Ezili Dantor. This image of a black Virgin Mary holding the dark-skinned Infant Jesus influenced the vision of one of the Haitian Loa spirits. It is thought that Polish soldiers may have carried her image to Saint-Domingue.

To this day, Polish Haitians are mixed race and often identified by such European features as blonde or lighter and straighter hair, light eyes, and facial features. Of course, other Europeans were on the island, including some who arrived after the war. Initially, most Poles settled in Cazale, La Vallée-de-Jacmel, Fond-des-Blancs, La Baleine, Port-Salut, and Saint-Jean-du-Sud, where they lived as peasants, along with their Haitian wives and families.

However, some were not interested in a peaceful life on a Caribbean island. Some Poles could not sit too long. Some of them made it back to Europe to fight with Napoleon on that continent, some went to the USA, and some became corsairs. Kazimierz Lux became the leader of a 60-strong unit of French and Polish corsairs that manned the Mosquito, a vessel under the command of a Frenchman. The ship's crew captured and looted several vessels in the Caribbean Sea, attracting the attention of the British navy. After evading the British for weeks, the Mosquito eventually engaged in battle, fighting off the pursuit. Afterward, the French and Polish crew could enjoy their hefty loot.

The Haitians are refreshing in a world full of betrayal and backstabbing, especially when this has been ingrained into Polish history, whether by their citizens or their allies.

This unique and inspiring history gives insight into the Polish spirit and how they recognize the underdogs, regardless of color. The connection is strong today, and the Polish are revered and not forgotten for their deeds. The Haitians have proved to be grateful and generous in their treatment of the Polish when many others throughout history have not.

Girard, Philippe R. (2011). The Slaves Who Defeated Napoleon: Toussaint Louverture and the Haitian War of Independence 1801–1804. Tuscaloosa, Alabama: The University of Alabama Press.