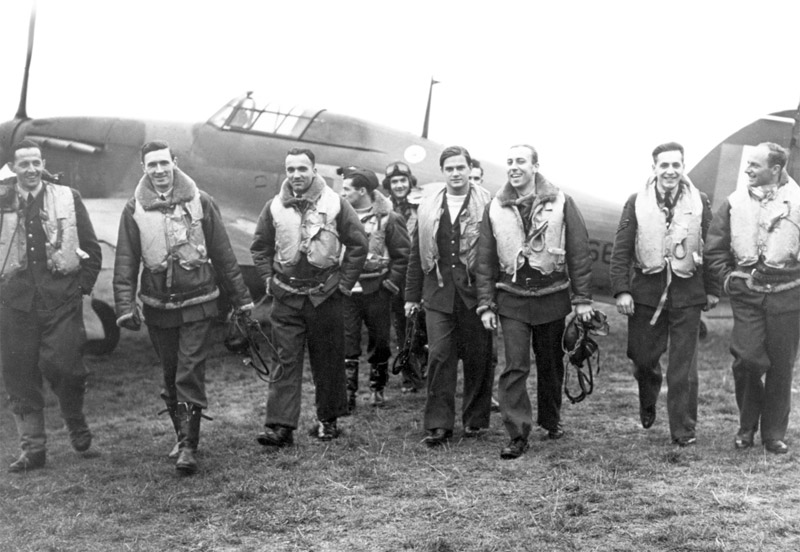 "Had it not been for the magnificent material contributed by the Polish squadrons and their unsurpassed gallantry, I hesitate to say that the outcome of the Battle would have been the same."

These men were the best, and no one could touch them. The Polish pilots are legends.

"Had it not been for the magnificent material contributed by the Polish squadrons and their unsurpassed gallantry, I hesitate to say that the outcome of the Battle would have been the same."

In reference to the pilots in the Battle of Britain, where the Polish pilots fought and excelled, Churchill said ""Never in the field of human conflict was so much owed by so many to so few.

The story of the Polish 303 squadron, also known as the  "Tadeusz Kościuszko Warsaw" Fighter Squadron, is one of the most fascinating and unique ones from the war, and I urge you to learn more about this and the exceptional men who played a role in it.

When the Polish pilots first arrived after having to escape their beleaguered nation, the RAF would not let them fly operationally. This was because few of the exiles spoke English, and ironically there was concern about their morale.

What the British did not yet realize was that many of the Poles were excellent pilots.

Having come through the Polish and French Campaigns, they had more combat experience than their comrades and employed superior tactics.

As the Battle of Britain wore on and the shortage of trained pilots became critical, the exiles were accepted into RAF squadrons, and two Polish fighter units, No. 302 and 303 Squadrons, were formed.

Once committed to action, the Poles flew and fought superbly, shooting down 203 enemy aircraft for the loss of 29 pilots killed.

The 303 Squadron became the most successful Fighter Command unit in the Battle, shooting down 126 German machines in only 42 days.

The Polish had the most confirmed kills and most negligible losses. They were the best of the best when it came to pilots in the Battle of Britain.

Although the Poles may have likely changed the outcome of the Battle of Britain and with this, possibly the war, they were not invited to the victory parade in London.

This is just one of the many stories where the Polish played a pivotal role in World War II history.  Without Polish intervention, history may be very different.