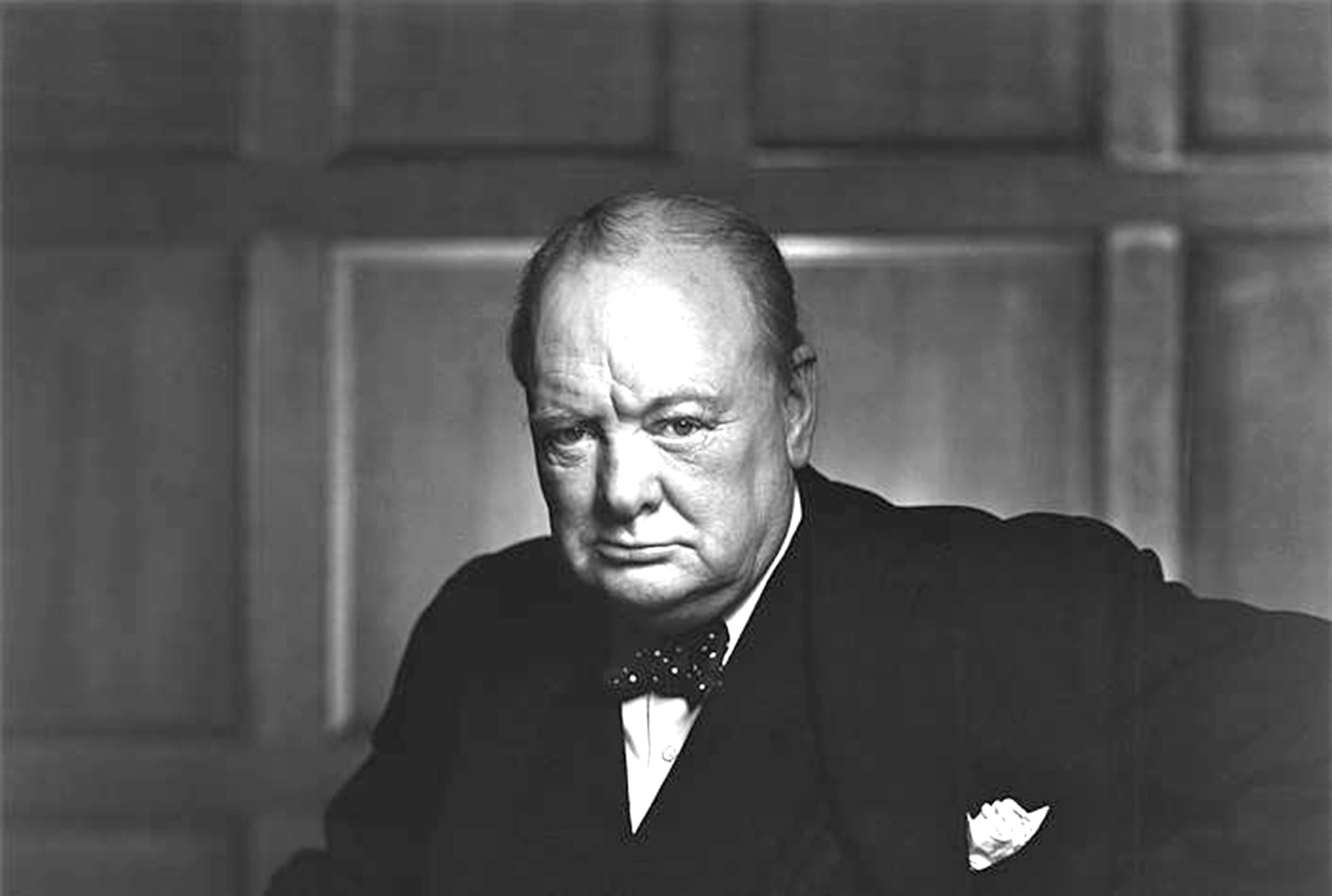 Churchill and the “Polish Problem”.

Analysis of a Top Secret White House memorandum, Churchill resolving the “Polish problem”. A message from May 11, 1945. It is from William Leahy, Chairman of the US Joint Chiefs of Staff relaying a message to U.S. Secretary of State which British Prime Minister Winston Churchill had dispatched to Secretary-General of the newly-formed United Nations Organization Foreign Secretary Anthony Eden.

In this revealing document, Churchill counseled Eden on the urgency in resolving the Polish problem and expresses distress over European security if Allied American and European troops should withdraw too quickly. In the document, Churchill shows his apparent concern at what appears to be a new Soviet-controlled Eastern Europe. Something, ironically, he actually played a part in creating.

The attachment is a copy of this two-page document, in its entirety. I chose this manuscript because it was written directly after World War II and we will be studying the Great War and the Soviet Union and it relates to both. The end of the Great War brought about a free Poland that had not existed for 123 years and the Soviet Union brought an end to that independent Poland.

My analysis is based primarily on what happened in Poland after World War II. This communication is about the resolution of the Polish matter in general. I will assess this in the context of Prime Minister Churchill’s memorandum. I am critical of the position of the allies including Churchill during and after the war in reference to Poland.

It is my opinion that the conference at Yalta precipitated the transfer of this document and its aftermath is illustrated here. In the course of only one week the “Big Three” – American President Franklin D. Roosevelt, Churchill, and Soviet Premier Marshall Josef Stalin,agreed upon the configuration of a post-war Europe and sealed Poland’s fate,and that of the Eastern Europe, for the next 47 years.

Churchill articulated concern over what he coined as a “Polish deadlock”, worried about the impending tide of Soviet expansion, and feared Poland would be “completely engulfed and buried deep in Russian-occupied lands”. However, in the wake of the Yalta conference these apprehensions were swept aside and replaced by the single determination to win the war – whatever the cost.

As the memo states, Eastern Europe, as a whole, was about to be overrun and abandoned to the Soviets. The Poles, who the British initially went to war for, were now simply left at the mercy of a Soviet-backed government (contrary to what the Polish populace wanted). In this pessimistic memo, Winston Churchill states that “This constitutes an event in history to which there has been no parallel”.

Churchill, it seems, was anxious or disappointed at the outcome of the Yalta Conference and what the future of Europe was to become. In retrospect, the events at Yalta, should have foretold such a bitter ending. As for Roosevelt, one of Yalta’s other players, the main preoccupation in 1944, it seems, was winning another Presidential term.

Roosevelt never seemed to care about the Poles or the Polish problem. Roosevelt all along remained intentionally ignorant and steadfastly refused to confront any of the facts despite constant attempts by the State Department to inform him of the true nature of “Russian diplomacy”. FDR unabashedly defended his opinion of Stalin when he said, “I think that if I give him everything that I possibly can and ask nothing from him in return, noblesse oblige, he won’t try to annex anything and will work for a world of democracy and peace”.

This short memorandum after Roosevelt’s death demonstrates the true nature of the chaos wrought by what is in my opinion, egotistical and contemptuous ignorance. Churchill, on the other hand, had long been a ruthless critic of communism and thoroughly detested Stalin and his regime, which reveals all the more his calculating and dubious nature. Historians now know that he was well informed about Stalin’s homicidal campaigns, the endless purges, the slaughter of the Red Army and in particular his regime’s hand in the massacre of thousands of Polish Officers at Katyn in 1940.

He knew all of this but balked at Yalta and issued documents like the one passed on to Eden to make certain his reputation would remain unscathed for generations to come. The Warsaw Uprising of 1944, an act that led to the deaths of hundreds of thousands (more than Nagasaki and Hiroshima combined) was the betrayal of the Poles by Stalin and the Soviets.

At the critical moment when the Polish Army most anticipated help from the Soviets, the Red Army stopped at the banks of the Vistula River and simply watched and waited while the Nazis slaughtered the Poles. This was dreadfully shameful because Churchill and Roosevelt refused to help the Polish Home Army despite their frenzied pleas for assistance.

Churchill even pushed an obligatory media ban to thwart these facts from becoming public knowledge. (Lt. John Ward, a British soldier and member of the Armia Krajowa reported daily on the events in Warsaw. Not a word was mentioned about Warsaw in any of the nine press conferences). After this sickening defeat of the the Polish resistance in1944, Churchill met with the Polish Prime Minister in Moscow, turned to him and uttered these words: “The Russians will sweep through your country and your people will be liquidated. You are on the verge of annihilation.”

In evaluating this document, it seems Churchill is concerned about the fate of Poland and Eastern Europe only for his own posterity. Churchill was a highly capable orator who also demonstrated an exceptional stage license. Memos like this serve only to perpetuate this deception, a tactic which was well-timed. His gesture of trying to salvage European safekeeping at the last moment could only assure that Churchill’s political integrity and legacy would remain unharmed.

Here we see political maneuvering and trickery by one of histories’ most revered persons. I chose this to illuminate the effects of the betrayal of Poland and how a memorandum that would be allowed to be leaked would assure a politician a legacy of determination and greatness.

Many great men are flawed, but many brave people of Poland were “liquidated” and the country brought to the verge of “annihilation” due to the political and egotistical machinations of a few select men such as Winston Churchill. Luckily for him, however, his reputation avoided a similar fate. 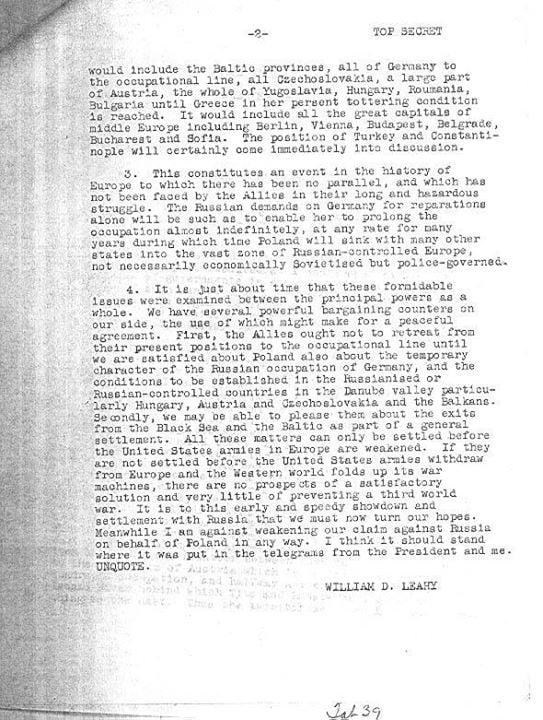